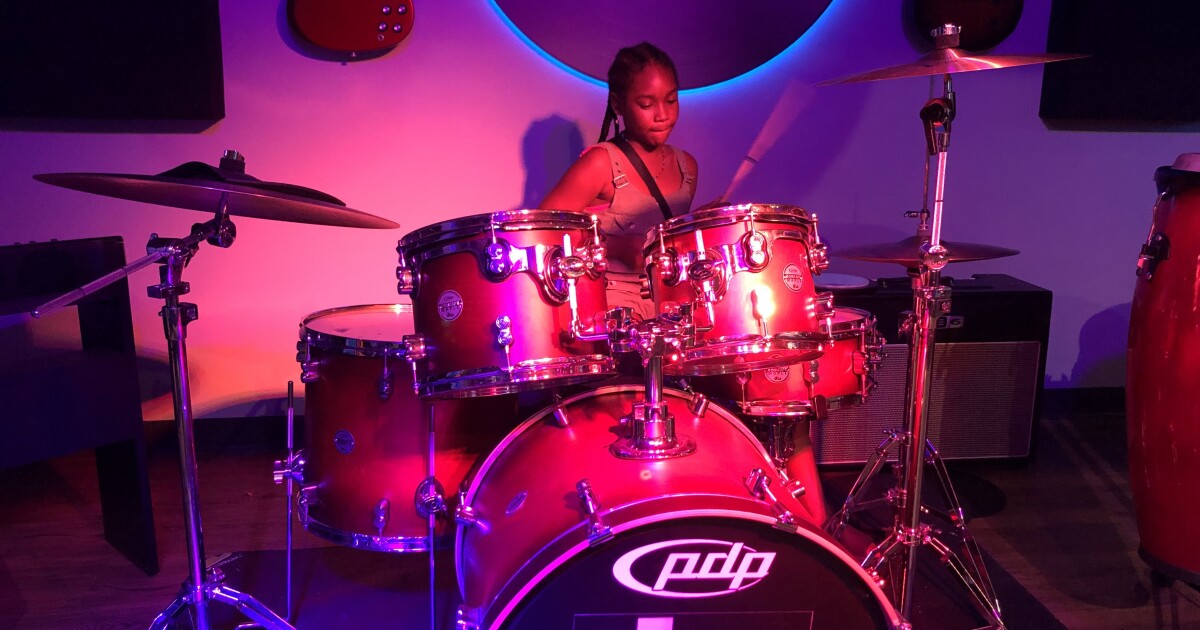 It is housed within the Milwaukee Academy of Sciences Charter School in the Avenues Ouest district. The studio is a collaboration between the school, the Boys and Girls Club of Greater Milwaukee, and a national nonprofit organization called Notes for Notes.

Notes for Notes operates more than 20 recording studios that young people can use for free in cities like Nashville and New York. This is the first in Milwaukee.

Davonte “Dae” Hill is the lead producer at the Milwaukee Notes for Notes studio. As a Milwaukee musician and youth mentor, work allows him to combine his passions.

“I feel like this job came to me, instead of looking for it – it found me,” Hill says. “And I hope we inspire the next generation of producers, artists, engineers, etc.”

This summer, Hill is hosting an afternoon program for Boys and Girls Club students at the Milwaukee Academy of Science. During my visit, several college students are there.

The colorful space is equipped with drums, pianos, guitars and recording booths.

“It’s pretty much – we allow young people to come into this space, let them play to see what appeals to them, whether it’s an instrument, whether it’s singing, producing, engineering,” explains Hill. “And we help them in this area.”

Most of the students in today’s group are interested in singing.

Hill takes the students to the production room, where he plays a beat he created. Byron begins to freestyle much to the chagrin of the other students. I ask Byron later where the inspiration for freestyle comes from.

Byron says he has always been interested in music.

“When I was young, I loved to sing and rap and I wanted to be famous”, explains the sixth-grader. “And my future will be a singer and a rapper.”

Hill tells me that it was only the second day that Byron came to the Notes for Notes studio.

“And it’s like, I don’t know, he was possessed by the talent ghost, I guess,” Hill says. “Because he came in straight away and tried to assert himself and show that he had skills and he had talent. It was just a magical moment because it inspired other young people to get into song as well.”

Byron’s song, called Day one relates to the first day of school. He will work on the lyrics in the next few days.

“We gave him the pace that we finished today to take it home, so he can actually take some of the things that he has in mind, write them down and structure them properly,” Hill said.

Day one will be the second song recorded since the summer schedule began at Notes for Notes studio in June. The first song is called Become crazy and features sixth and seventh graders Rashyia Gooch, Marzeriah Smith and Deaysia “DD” Robertson.

The girls say Hill made them record their tracks over and over to get it right.

“You can get it wrong many times, but when you finally get it, it’s like ‘yes! “,” says DD, who wants to keep making music. “It helps you get rid of your stress and your anger, when you hit the music, put your head down – it makes you excited when you hear the song. Like yeah, I like that.”

At the start of the school year, even more students will be able to use the Notes for Notes studio as a place of expression.

Hill says the Academy of Sciences plans to use it for music lessons during the school day. It will also host the after-school programs of the Boys and Girls Club at the charter school.

“Just being able to have a safe space to express themselves, have fun, and be able to let them create things that will inspire them to find their purpose in life,” Hill said. “Because not everyone can kick a football or make a three-point shot like Steph Curry. So we have to open up different avenues for them. And music has been taken out of public schools for the last 10 years, so have a space like this kind of counters that.”

Have an education question you’d like Emily Files of WUWM to investigate further? Submit it below.