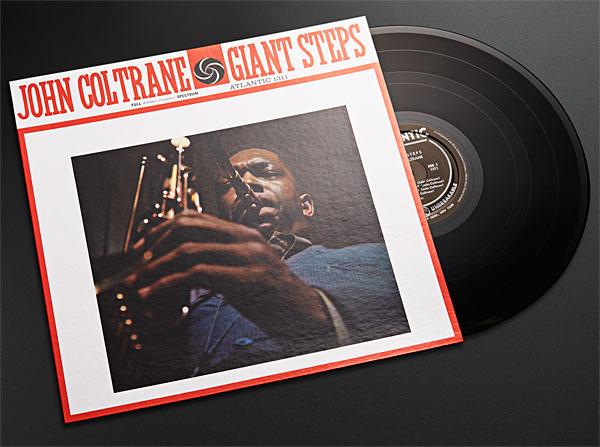 I’ve never written about ultra-boutique reissues from the London-based Electric Recording Company. Pressed in quantities of around 300, each title sells out within days (or hours) of release, despite being priced at $400 or more. Why review what you can’t have?

But now ERC has released a meticulous mono pressing of Giant stepJohn Coltrane’s first author masterpiece, so now is a good time to step in and say something about the company in general and this album in particular.

Many eyeballs have jumped on this label’s eccentricities: its obsession with reproducing vintage pressings as accurately as possible, down to its mastery of original analog tapes on Lyrec/EMI tube tape recorders and Ortofon cutting heads; his equally intense dedication to matching the finely lettered and color-restored covers; its eccentric business model. I’m not here to comment on that last factor. Pete Hutchison, the company’s founder, said his processes were so expensive that albums wouldn’t cost less even if he scored more, and his profit margins are surprisingly low anyway. I’ll take him at his word. As to whether the albums are worth it, stereophilic is not the ideal forum to weigh questions of price and value.

Some time ago, I found myself on the ERC competitor list. (I didn’t ask to be put there, but I didn’t protest either.) From what I’ve heard, I’d say this: if you hear that ERC is about to release a album you like, order a copy. In the unlikely event that it disappoints, you can probably sell it for cost or more. (I have not resold any of the albums sent to me; to do so would be a violation of review ethics.)

Giant step is a remarkable release for at least two reasons. First, it is, in my opinion, the best – and certainly the most important – of the 14 jazz albums that ERC has reissued so far. It is Coltrane’s decisive break from sideman (which he had always been before, even when recording albums under his own name) to leader, and – not unrelated – the first album for which he composed all the pieces. Six of the album’s seven tracks were recorded in May 1959, just two weeks after ‘Trane’s work on Miles Davis’s kind of blueyet his approach to music marks a dramatic departure here. kind of blue was the pinnacle of Miles’ experience with modal jazz, where changes are built on scales, not chords; most parts on Giant step, especially the two most innovative—the title track and “Countdown”—were built on chords: chords nested within chords, chords stacked upon chords, chords within incredibly fast progressions. These are challenges that every young jazz saxophonist tries to overcome. It’s the most complex, frenetic and orderly fusion of freedom and structure in jazz history. These are tracks to awaken the mind and the body.

The other five tracks are fairly conventional, albeit at a very high level; Coltrane was still working on a multitude of ideas, and he wouldn’t make sense of them for a few years, when he left Atlantic for Impulse! and forms his “classic quartet” with pianist McCoy Tyner, bassist Jimmy Garrison and drummer Elvin Jones. On Giant step, he’s backed by a unique but perfectly suited rhythm section: pianist Tommy Flanagan, bassist Paul Chambers (the only comrade in Miles’ sextet) and drummer Art Taylor. Yet for one of his tracks, “Naima” – perhaps Coltrane’s most magnificent ballad, recorded months later, in December 1959 – he brought in the rest of Miles’ rhythm section (pianist Wynton Kelly and drummer Jimmy Cobb), and it’s the only track on this album that evokes the mood and colors of kind of blue. (As I said, he was still working on a lot of ideas and would continue to do so even after he found the sound he was looking for, with supreme love.)

The second reason why this Giant step is a remarkable release is that it comes from the vaults of Atlantic Records, which audiophile labels have yet to scour. Rhino Records dived deepest several years ago, releasing a box set, on LP and CD, of Coltrane’s seven Atlantic albums and, a little later, Ornette Coleman’s 10 Atlantics, both collections recorded in 1959 -1961.

Those Rhinos sounded pretty good, but nothing like this ERC, which just sounds amazing. Coltrane’s tenor sax comes out of the soundstage, 3D, overflowing with brass, billowing with air: you can practically see it blowing into the mouthpiece. Piano tones, chords and harmonics are crystal clear, as are Chambers’ bass rides, something you can’t tell from any other reissue of this album. The drums are a bit off (as they were, I suspect, on the original tapes), although all of the drum tracks, and all of the beats within the beats, are clear and punchy.

This version is mastered from the mono tapes. I don’t usually understand mavens who prefer mono even when an album was also recorded in stereo, but they’re right this time: mono works better here. On the stereo version, Tom Dowd, the original engineer, framed the sound, putting some musicians in the left speaker, others in the right speaker, as was common at the time. It’s less distracting, and it makes the music more cohesive, to put them all right in the middle.

It’s a vital album, laid out as clearly as we’re likely to hear.