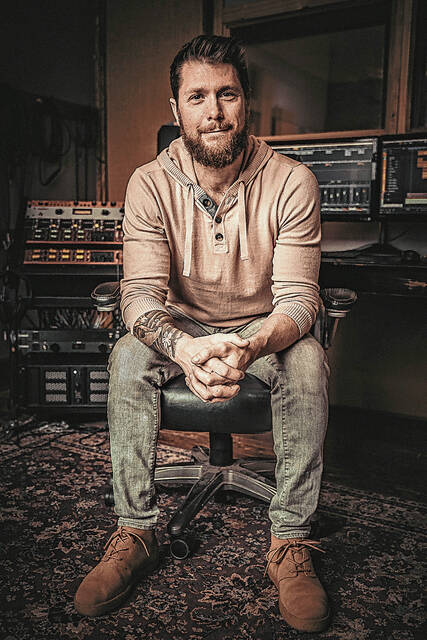 Inside a historic church in downtown Franklin, local musicians can find sanctuary for their art.

The reverberations of the organ and the voices of the choristers once echoed in space. Now the steady thud of drums, melodic guitars and dozens of other instruments fills what has become Electric Roy Studios.

The church’s deep-rooted history and unique architecture provided a great place for founder Andrew Noblitt to make music in his hometown.

“Being half a mile from where I grew up and owning a recording studio there is really cool,” he said. “Franklin has really improved recently, and coming back to a place that has really cultivated an atmosphere for music and art, it’s nice to be in a space where that’s sought after.”

Noblitt created Electric Roy Studios to provide a warm and inviting space for artists to create new music, while repurposing a unique space in downtown Franklin. Housed on the upper floor of the former First Baptist Church, the studio offers recording, mixing and mastering services.

Ascending to the top floor of the old church, visitors to Electric Roy are greeted with vivid paintings by local artists, illuminated by natural light from massive windows.

The main studio space contains drums, an upright piano and stacks of amplifiers, arranged around a soft woven rug. A Flying V guitar hangs on the wall.

Separate rooms for vocal recording and mixing desk work were built around the space.

“Musicians come in and say how neat it is, how much they love what it does. It’s quite a vibe,” Noblitt said.

Noblitt, a Franklin native and resident of Greenwood, has been a part of the central Indiana music scene for years. He is a member of Among the Compromised, a local grunge, soul and pop band, and has collaborated with many local musicians.

To feed his need to create music, he built his own home recording studio in his Greenwood home. One of the things that drew him to the house when he bought it nine years ago was a detached, soundproof two-car garage.

At one point, he ran power lines from the garage to the main house, where he had set up his control room. A video feed allowed him to see the musicians in the garage recording.

“It was really primitive at first, but when I grew up I found that I really liked recording,” he said.

The situation was working, but Noblitt thought there might be a better location for the studio than at home. When he and his wife returned to Franklin in 2020, he began looking for a suitable space in town.

A number of commercial venues were available for rent, but Noblitt did not think any would work for the studio.

“Having a studio is noisy and everyone would complain,” he said.

But as he searched, Noblitt came across the availability of the old church building. The First Baptist Church, which was organized as a congregation in 1832, had met in the building at the corner of Home and Jefferson streets from 1885 to 2018.

The developer who bought it from the congregation offered space to rent for different businesses.

As Noblitt toured the church, he was captivated by the second floor room.

“Knowing it was a 100-year-old church, there must have been hardwood underneath,” he said. “I saw high ceilings, weird angles in the room – they are by no means equal, and I really want that, and hard wood. So we jumped on that before anyone else.

He got to work making adjustments and additions. Walls were installed to create separate recording and mixing spaces. The floors were all carpeted, which can dampen sound in a recording environment, so he tore it up to get to the hardwood below.

The space had no electricity, so new panels and chutes had to be installed to handle the various equipment that would be used.

Much of the studio elements Noblitt had already built for his previous space, so he moved everything into the church.

Noblitt, who works as a craftsman with Ace Handyman, is good at woodworking. So the studio has wood accented panels and scatters, as well as artwork

“It felt like my space. There was just this vibe,” he said.

The new Electric Roy Studios opened in March 2021. Over the past year, the studio has hosted many local artists looking to record material, including high-energy rock trio The Bellow Cranes and keyboardist/producer Brian “B’Squared” Barbour.

One thing Noblitt hears over and over again is how the atmosphere of the space adds to the creative element.

“If you’re working with musicians, half of what you can record is how they feel that day,” he said. “If they come in and are in a bad mood, you might hear some angry music. But for the most part, everyone came and felt they could make music here.