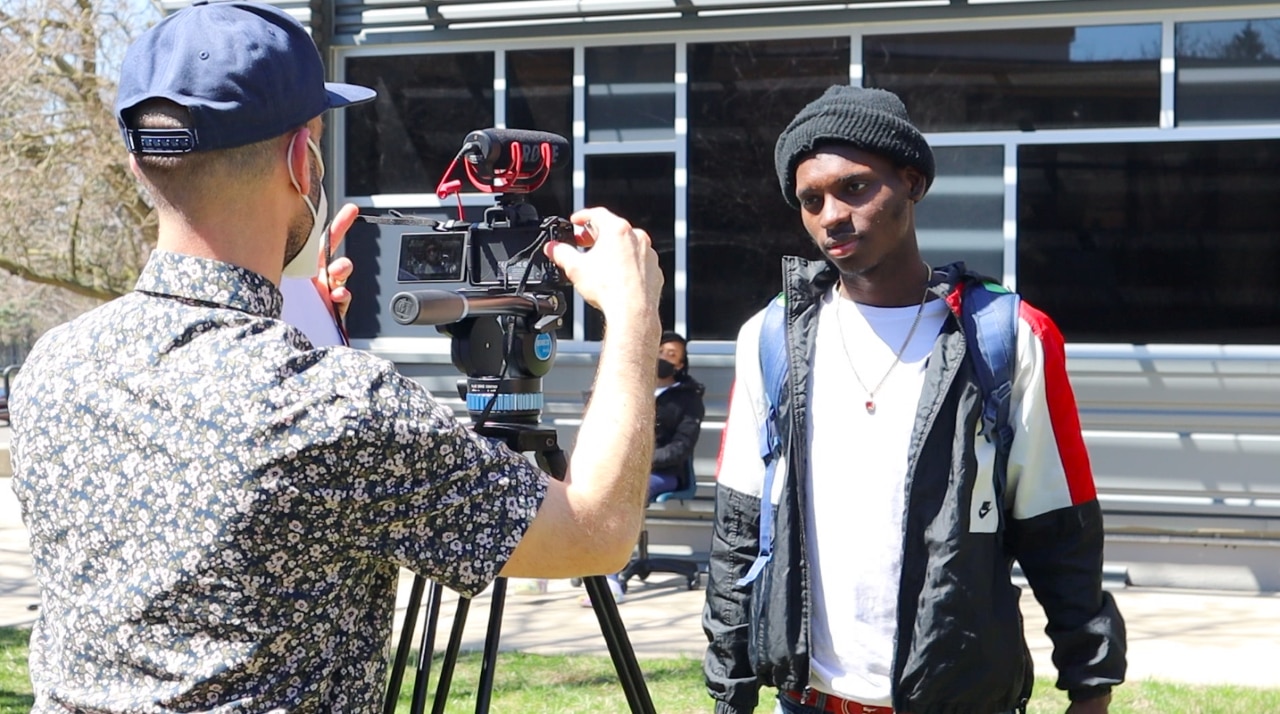 ANN ARBOR, MI — It became apparent that students at Pathways to Success High School in Ann Arbor had a desire to have their voices heard that was not being heeded when Quinn Strassel began spending time with them.

Teaching these students on Zoom, while also serving as director of Community High School’s drama program, Strassel said Pathway students don’t feel they have the same access to opportunities that other high school students have, and they wanted a space to be able to express their creativity.

Strassel left Community High School after leading its theater program for 11 years to start a performing arts program at Pathways to Success, with the goal of helping students who have experienced poverty and trauma find their voice through creative efforts.

“What became clear to me is that so many Pathways kids have extraordinary talent and potential,” Strassel said. “These kids had so much potential that it would take just a little effort for someone to make it happen.”

This year, Strassel launched the Actors Studio at Pathways, where the students spent the school year building a recording studio. ASAP students recently released their first video production, “Voices from the Path”, a 27-minute documentary in five acts depicting the students’ dreams beyond high school, the process of building the recording studio, and an act featuring the school’s “glue”, food service worker “Miss Anita”.

Students raised money to help build the studio before building it this fall, using power tools and installing green screen for the video production used to create ‘Voices from the Path’, which was produced by Strassel .

Featuring student interviews and documentary footage from this school year, “Voices from the Path” gives viewers a glimpse into the joys, dreams, struggles and successes of Pathways students, Strassel said.

Pathways is a secondary school for students who need or prefer a smaller, more intimate school environment that may not be available at larger, comprehensive secondary schools. The school offers online courses, traditional direct instruction models, project-based learning, community internships, and dual enrollment opportunities where students can earn college credit.

“Every day I realize how much these kids have to say and it’s just an honor to help them share their voice with our community,” Strassel said. “Our children have a perspective the world needs to hear and they share it through music, video, poetry and I feel so lucky to even be able to spend my days with these children.”

Each of the five acts of “Voices from the Path” portrays the hopes and dreams of Pathways students in interviews where students talk about their definition of success in act one, including graduation, going in college, set goals and achieve them and just be happy.

Act Two documents the construction of the recording studio, with students using miter saws, installing drywall and insulation, and decorating the studio with spray paint.

Building the studio, creating the documentary, and being able to use it to produce his own rap EP “Blessed Child,” gave 18-year-old Pathways student James Trussell a goal of going to school, a- he declared. In addition to helping him learn to use tools,

The documentary’s third act tells the story of cafeteria worker Anita Hargrove, or simply “Miss Anita,” describing her role as the school’s most valuable employee, according to Passport students. Hargrove’s love for every student is evident, making sure they are all fed, even if they show up late, and handing out bottled water in the cafeteria.

The students described Hargrove’s life at Pathways and elsewhere, a place close to his heart.

“I guess when you really like something or care about something, it all falls into place,” Hargrove said in the documentary. “It ended up being more than just a restaurant service. If you need someone to talk to, someone to cry to, the kids will come to me.

In the fourth act, the students detail their passions and ambitions, which range from producing horror films to singing and recording music.

Pathways student Selena Warren-Riggs documents her interview with Detroit Prod music producer. by Bert, giving insight into the opportunities the students had to interview industry veterans about the music industry.

“Being in the studio kind of gives you a sense of what it’s like to make music and that feeling of really being in the studio and being able to just go in there and express yourself however you want,” said said Warren-Riggs. .

The fifth and final act of the documentary focuses on “love and beauty”, detailing the work of Pathways student Asiya Hurt, who talks about body shaming and self-love while describing her work in the program of cosmetology.

Strassel believes the construction of the studio has given students a sense of pride in where they come to learn, while helping them tell their stories in new and creative ways.

“What I liked about the idea of ​​starting in the studio was that the kids could get hands-on experience and they could take ownership of it immediately,” he said. “I think that’s definitely the case, that the kids felt a sense of belonging to the space.”

Students walk out of class at Pioneer High to protest the potential overthrow of Roe v. wade

NEW: From classroom to recording studio

A historic church transformed into a recording studio